Hello, Happy hump day! I hope your week is going well and that you are feeling full of positive vibes & blue skies. I have had a pretty tough last 7 days, but hoping this current flare will move swiftly on!

I decided it would be insightful to update you on some of my personal/home life, as there has been significant changes over the past few years. The first of which is how my continued health battle has meant I have had to move back home with my parents in Cornwall. I had mixed feelings about this change at the time for a number of reasons, but it ultimately felt like the right thing to do and something I have no regrets about. Where I was previously living, was a huge 300 miles away from my parents and I beleive no matter what age you are, when you are continually sick there are just days when only being around your family brings you the comfort and TLC that you need.

Cornwall is a beautiful place to live and of course I appreciate the healing surroundings of my home town, but at the time it meant I was truly stepping away form life near London. This meant facing up to the reality that I was also stepping that bit further away from my dreams as a performer, the very reason I was there in the first place. Reality at times literally hits you in the face, so to speak and I found myself sort of entering a phase in my life where I felt to some degree I was literally mourning the person I was and the life I had before I got sick. I found it mentally really difficult to accept that my life was not going to be how I had previously mapped out in my career, friendships/relationships and health. Physically I felt a million miles away from the strong, confident performer and women I had worked so hard to grow into and this ever growing distance from my dreams just seemed to be getting bigger.

When I moved back in with my parents I was 31 and at this age most people are settled in life, having a family of their own or even buying their first home. I felt at the other end of the spectrum, almost regressing back to my teen years and found I lost a great deal of independence. None of they way I felt was because of my parents, as they were absolutely incredible, making me feel so welcome and loved unconditionally. It made me really think about the whole scenario being a huge change for them too, it really wasn’t all about me. I am sure the last thing they expected was to lose their spare room to their adult daughter, have an extra mouth to feed and have someone else to worry about on a daily basis! I am beyond grateful that I have two amazing parents who I love so much and I am so thankful that my Mum, Dad and my 3 siblings have been here for me when I truly needed them the most. 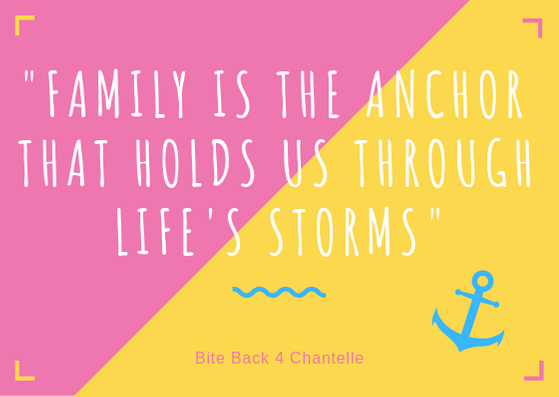 My Mum also has her own complex health conditions and she has struggled for over 10 years with her with an array of illness’. Some of which were likely caused by a rare immune disorder she developed. This rare immune deficiency was characterised by a reduction in her levels of immunoglobulins, the antibodies that fight infection. This lowered antibody count meant she consequently suffered from a significantly impaired immune system and was at a constant increased risk of infection. She has had to have countless operations year after year, some of which have included major airway surgeries and a variety of others to enable her to manage her health & life as best she can. Over the years I have seem my Mum have long stays in hospital fighting serious levels of infection. In addition to this she has had to receive monthly transfusions of intravenous globulin replacement therapy over 5 years in order to enable her immune system to continue fighting the ‘intruders’ and to protect her from any further complications. It has been more than enough for her to have to worry about her own health and so I felt enormously guilty that she also had to worry about me. I know none of my health situation is my own fault and I didn’t cause my illness, but it doesn’t stop me wishing that I had more control over it and its effects not just on my life, but my families too.

With two out of the 3 of us in this household already being chronically sick it sure was challenging enough, but then we were thrown another of life’s curveballs! Last June my Dad fell extremely un-well whilst working offshore on a diving vessel. An acute infection spiralled out of control in a short space of time and he developed systemic septicaemia. As you may know Sepsis is an incredibly serious complication of an infection and it requires intensive treatment and fast, or the risk is multiple organ failure or even death. His whole body was infected with this life-threatening condition and it was an incredibly scary time for us all. My Dad was incredibly lucky and he pulled though, but sepsis had really taken its toll on his body and caused significant damage. On admission to hospital, we were told the sepsis infection had badly damaged his mitral heart valve and that he was at high risk of cardiac arrest. He was then transferred to a hospital 80 miles away from our home as this was the closest hospital that had Cardio-thoracic centre with the consultants and equipment that he needed. My dad also suffered from a Subarachnoid Hemorrhage which is a life threatening type of stroke caused by bleeding into the space around the brain. This complicated and delayed his treatment, but eventually he was able to undergo open heart surgery for the mitral valve replacement and the symptoms of the stroke thankfully in time reversed. He was in hospital on high does antibiotics to fight the sepsis for over 2 months and the doctors managed to completely eradicate the infection in this time. He now has a mechanical heart valve, which needs daily medication to control blood coagulation levels and six months on doctors are still trying to get levels stable. He has been left with some impaired kidney function and on discharge from hospital was extremely weak. Over time he is getting stronger and we are all so thankful he came through such a difficult battle.

With my Dad getting so sick, it has meant he can no longer return to his employment offshore. This has not only been incredibly difficult for him as it was the only career he knew, but it has also meant there is currently no financial income. My parents have paid out a huge amount towards my treatment over the past 5 years where they could and treatment costs to date have already amounted to over £90,000. With our financial circumstances now so very different and Lyme treatment still needing to be self funded, this has led me to kickstart a new fundraising page. Asking for financial help is never easy to do, but after getting this far forward in my treatment journey I really can’t justify stopping now. I am still unable to work and now solely reliant on fundraising in order to continue to access the medication and specialist help which is vital to me having any chance at continuing my fight with Lyme disease and one day hopefully reaching remission.

I do not take for granted the progress I have made and the financial, physical and mental support I have had from so many people and that I so kindly continue to receive. I honestly don’t think I would be here now if it wasn’t for the intensive treatment I have been so lucky to have, I truly believe it has saved my life. I hope this blog post has enabled you some insight into why I am in the situation of needing to resort to on-going fundraising and may I take this opportunity to thank each and every one of you from the bottom of my heart who have contributed in any way to my journey so far. Well done for reaching the end of this post, sorry it was a bit of an essay!